The Unicorn in the Barn - Excerpt 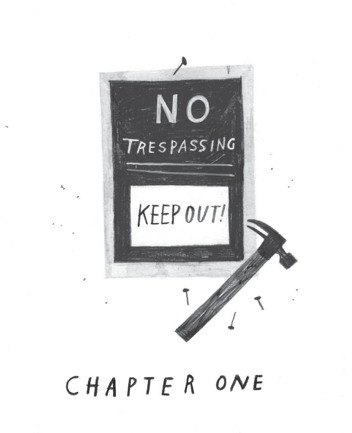 My dad always told me, “Never surprise somebody swinging a hammer; something is li- able to get smashed.” Still, when I first saw Allegra Brancusi, I couldn’t help myself. She was slapping a No Trespassing sign up against a tree — my tree. The one with my treehouse in it.

“Hey, stop that!” I shouted. She was raising the hammer to drive in the nail and, sure enough, that hammer went flying back over her shoulder and nearly clipped me on the arm.

She whirled around and glared at me. “You shouldn’t sneak up on people like that. It’s rude.” It’s not like I had done a commando crawl through the bushes for the sole purpose of sneaking up on her. I had just walked down the path like always. Not my fault I couldn’t see her until I got to the top of the ridge. “I’m posting these signs and you can’t stop me,” she said, shaking the yellow-and-black poster in my face.

“I can see that. What I want to know is why. This is Harper’s Woods and I’m a Harper. That’s my tree- house up there and you can’t keep me out.” I glared back.

“Well, Mr. A. Harper, it should be called Brancusi Woods now and I’m Allegra Brancusi, that’s why.” She swung her arm out, using the poster as a pointer. “My mother bought this farm. She told me to post these No Trespassing signs on this side of our prop- erty, in a line starting at that telephone pole.”

The telephone pole was the third one down from our mailbox, next to the road at the bottom of the hill. It had a ring of yellow-and-black signs wrapped around it. There was a stretch of weeds that used to be a cornfield, and right behind it, the edge of the woods. Sure enough, a line of posters marked trees every few feet, up to where we were standing. She was right about where the property line started, but not about where it ran. I set her straight right then.

“So, Allegra Who-si, didn’t your mom tell you about surveyor’s stakes?” She shook her head. “Your property line starts at that pole, but it doesn’t run straight up to the top of the ridge. See those stakes with the orange ribbons? That’s where the line is.” I pointed at the stake about fifty yards down the hill and to another stake ten feet beyond that and an- other beyond that. Her eyes followed my finger and she bit her bottom lip, looking uncertain now. “How do you know that?” she asked.

“I helped the surveyor set them out. We had to sell the farmhouse, but my dad promised we’d keep the top of this hill. Bobby Knapp did the surveying; you can ask him.” I picked up the hammer and handed it back to her. “If anybody is trespassing here, it’s you.”

“Oh,” she said, taking the hammer and poking it through a loop on the leg of her carpenter jeans. It was the first time I ever saw a girl do that— actually use one of those loops for what you’re supposed to. She looked back at the line of stakes, then picked up her backpack and stuffed the poster back inside.

“Yeah, well, you should check things out before you go hammering on other people’s trees.” I crossed my arms and waited.

“Whatever,” she said, shrugging her backpack across her shoulder. She stomped off down the hill toward the big white farmhouse that used to be my grandmother’s.

I grabbed on to the board nailed about four feet up the trunk and scrambled into my treehouse. It’s not much to look at, but it’s been my favorite place since I was six. It’s a small wooden square stuck to the side of the tree, just big enough for me to stretch out in. I built up the sides to about three feet high and I have a tarp in it to keep the rain off my stuff. The boards are this nice silvery gray color now.

The best thing is, it’s on this ridge, so you can see real well all around. It’s the perfect place to watch everything. I can even see where the little creek runs to the north. When the wind is still, I can hear the water.

Down to the west is my house, a brick ranch. It’s pretty close to the road, but still has a nice stand of trees curving around it, like the woods are hold- ing the house in its arms. My dad built it when he married my mom. On the other side of the rise, far- ther back in the woods, sits the farmhouse with a wraparound porch and a bunch of outbuildings. My many-times great-granddaddy, Cletus Harper, built the front part, just two little rooms and a fireplace, near about two hundred years ago. Harpers have been adding on to it ever since.

I peered over the side to watch Allegra trudge down the path out of the woods and into the back- yard of the farmhouse. When Grandma was living there, I must have walked that path at least four or five times a day. I hadn’t been down it in months, not since Grandma had to move into the nursing home and we had to sell the farmhouse. The girl disap- peared around the back corner of the house. I heard the screen door slam, so I guess she went inside.

After a few minutes, I figured she wasn’t coming back, so I stretched out on the boards. I let my eyes close to little slits, until the leaves and patches of light looked like big white and green blotches moving just beyond my eyelashes.

I must’ve fallen asleep, because when I opened my eyes, everything was dark. The half-moon gave enough light to see some of the branches. Rising up on my knees, I shuffled around to look down at our house. My brother Steve’s car wasn’t in the carport. 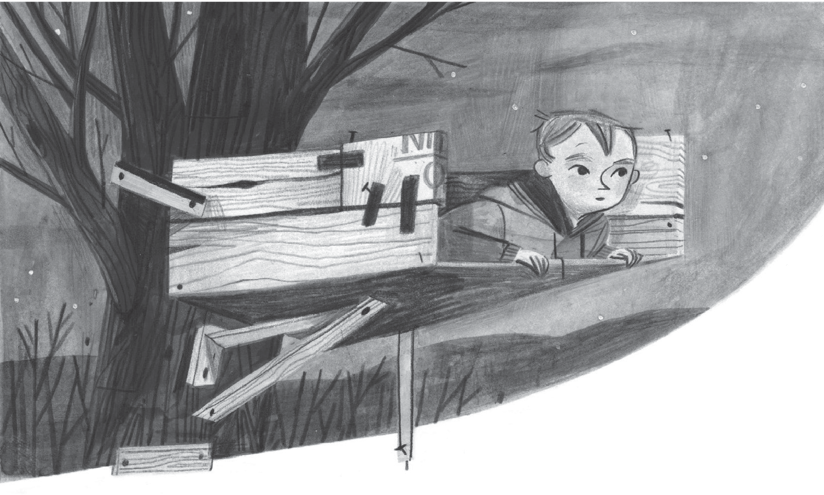 He was probably still at work. Ghostly blue light flickered from the den window. I guess Dad fell asleep too, in front of the TV again. My stomach growled. I had missed dinner, if anybody had both- ered to fix it.

Leaves shushed and rustled over by the creek. It sounded like something big and cautious, maybe a deer, was passing. I just turned my head to look, so as not to make any sound and spook it. Even the weak lights from the house had dulled my night vision, so I couldn’t see anything at first. Then a pale shape moved near a clump of blackberry canes. It was too big to be a raccoon and too quiet to be a stray calf.

Maybe it was the white deer. People had talked about a white deer around here for ages, although nobody could say for sure if it was a buck or a doe. Every season, some hunter swore he shot it, but it al- ways got away.

The boards creaked softly as I moved into a better position to watch. The animal stepped away from the underbrush, definitely the wrong size and shape for a calf. It came closer to the treehouse, moving slowly. My eyes had adjusted to the moonlight.

It wasn’t a deer.

White and glowing, with slender legs and a long curved neck, at first I thought it was a pony. Then it raised its head and I knew. Ponies don’t move so qui- etly through the woods. Ponies don’t have coats that shimmer like a pearl. And there’s never been a pony born with an ivory horn curling from the center of its forehead.

It was a unicorn.

It was the most beautiful thing I’d ever seen.

Looking at it, I got the most amazing feeling of comfort and happiness and excitement, all rolled up into one. Like when Grandma would sing me a lull- aby, or when I smacked a baseball way out to left field, or when the air is charged, just before lightning strikes.

I had never seen anything so amazing. I could have sat there looking at it all night. Then I noticed a strange smell, like roses and pine and new turned dirt.

The unicorn picked its way carefully around the trees with a funny gait, two steps and a hop. Its head drooped and after each hop, it huffed, a sound almost like a snort. As it moved down the ridge, I realized that it was lame. The unicorn stumbled and I sucked in my breath, but it didn’t fall. It reached the bottom of the hill. I wanted to help, but wild things are dan- gerous, especially when they’re hurt. And what could be wilder than a unicorn?

Something so beautiful should be perfect; it shouldn’t be hurting. I couldn’t just watch it  suffer. I started to climb down when it nickered, a long, low call.

A light flicked on inside the farmhouse; then the back porch light came on too. A tall lady 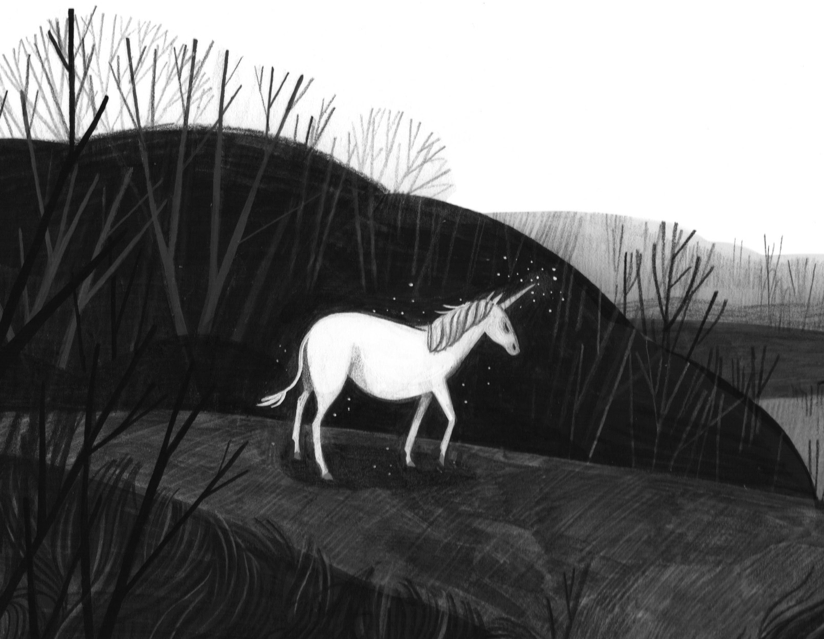 walked out of the house and stopped in the yard. She beckoned to the unicorn, then pulled open the barn door and stood to one side. The unicorn stopped, caught in the light from the barn, glowing like the moon. I thought it might bolt. It stared at the lady for a long moment before dropping its head and limping through the door. Once it was safely inside, the lady slid the door shut. 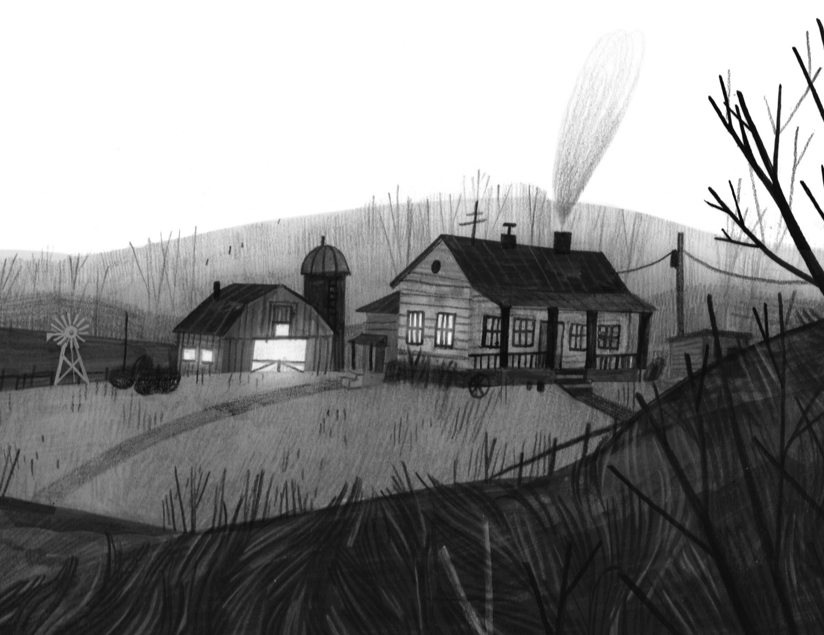 The Unicorn in the Barn (Paperback)

The Unicorn in the Barn (Hardcover)

A gift card good for online purchases only. Great when you can't get out of the house.

We embrace all current teachers & students (kindergarten through grad school, as well as homeschool). We offer all students & teachers 10% on most titles (inclusive most special orders). Also, ask us about our additional discounts for in-class book purchases and for bulk school orders!

It's been really great getting to know the folks over at N.C. Women's Prison Book Project ! They collect books for women in prison, and they have a wish list via our website. Here's their request:

"We get many, many requests for urban fiction, crochet, astrology, puzzle books, and dream interpretation. these titles are hard to find at thrift stores and rarely come in via donation, so we created a wish list with The Regulator Bookshop. check it out and find us on Twitter and Instagram if you haven't already!”

Head here to order books, and if you don't know this organization, check them out!

There are no products in your shopping cart.