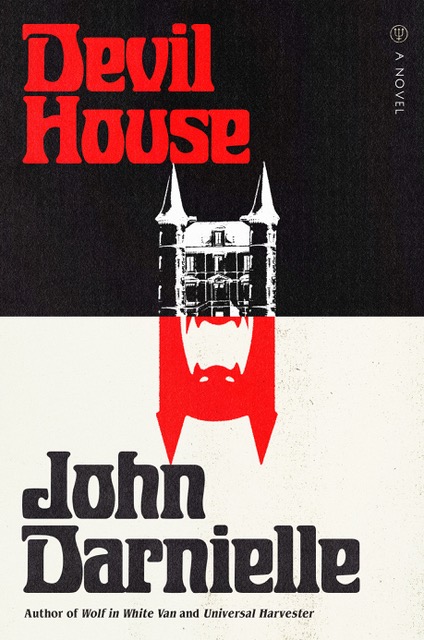 An epic, gripping novel about murder, truth, artistic obsession, and the dangers of storytelling, from the inimitable John Darnielle.

Gage Chandler is descended from kings. That’s what his mother always told him.

Now he is a true-crime writer with one grisly success—and movie adaptation—to his name, along with a series of subsequent lesser efforts that have paid the bills but not much more. But he is being offered the chance for the big break: to move into the house—what the locals call “The Devil House”—in which a briefly notorious pair of murders occurred in 1980s, apparently the work of disaffected teens. He begins his research with diligence and enthusiasm, but soon the story leads him into a puzzle he never expected—back into his own work and what it means, back to the very core of what he does and who he is.

John Darnielle has long been known to millions of Mountain Goats fans as a storyteller of uncanny sensitivity and mythic power. In Universal Harvester, and in Wolf in White Van before it, he has proven himself a novelist of the highest order. With Devil House, Darnielle rises above with a novel that blurs the line between fact and fiction, that combines daring formal experimentation with a gripping tale of crime, writing, memory, and artistic obsession.

A Finalist for the Locus Award (Best Horror Novel)

“Brilliant . . . Darnielle is a master at building suspense, and his writing is propulsive and urgent; it’s nearly impossible to stop reading . . . [Universal Harvester is] beyond worthwhile; it’s a major work by an author who is quickly becoming one of the brightest stars in American fiction.” —Michael Schaub, Los Angeles Times

“Grows in menace as the pages stack up . . . [But] more sensitive than one would expect from a more traditional tale of dread.” —Joe Hill, New York Times Book Review (Editors’ Choice)

"A moving, beautifully etched picture of America’s lost and profoundly lonely." —Kazuo Ishiguro, author of The Remains of the Day and winner of the 2017 Nobel Prize for Literature

We embrace all current teachers & students (kindergarten through grad school, as well as homeschool). We offer all students & teachers 10% on most titles (inclusive most special orders). Also, ask us about our additional discounts for in-class book purchases and for bulk school orders!

It's been really great getting to know the folks over at N.C. Women's Prison Book Project ! They collect books for women in prison, and they have a wish list via our website. Here's their request:

Right now, we are featuring books from our most-requested puzzle and crochet genres, along with books by some of our most-requested authors: Cassandra Clare, Kristin Hannah, and Sarah Donati! If you have other faves by these authors that aren't on our list, please feel encouraged to buy them and put "For NC Women's Prison Books" in the order notes!

Head here to order books, and if you don't know this organization, check them out!

There are no products in your shopping cart.

END_OF_DOCUMENT_TOKEN_TO_BE_REPLACED

We are not currently scheduling in-store events for 2022